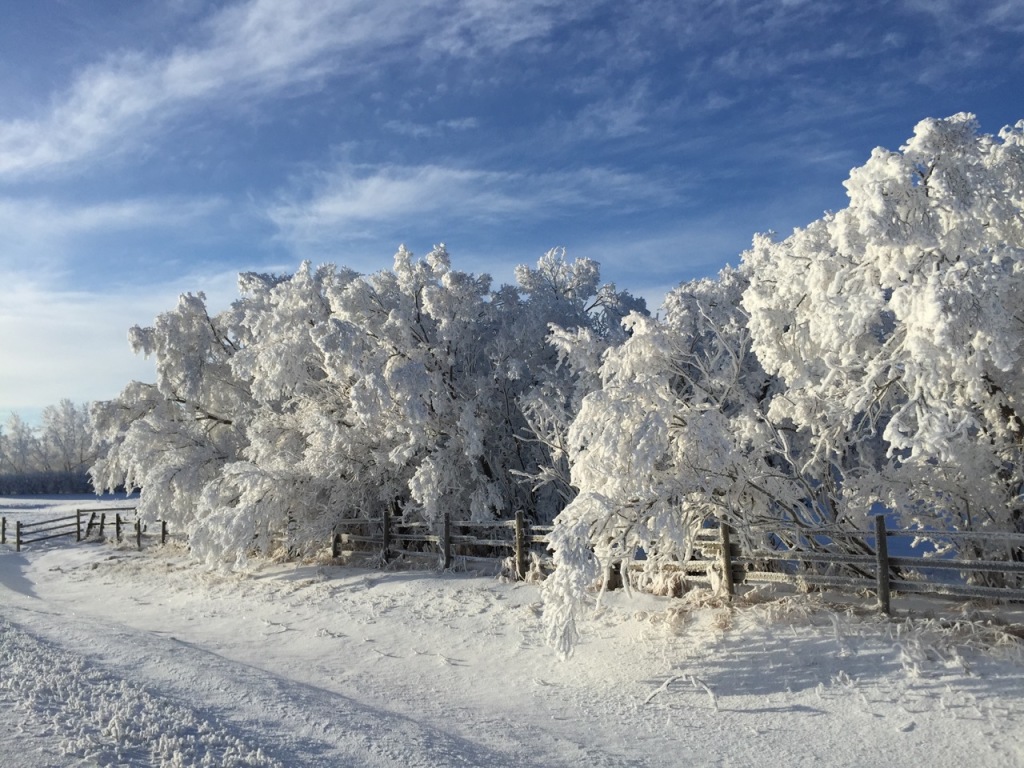 My first morning home, the fields surrounding our acreage were purest white, wheat stalks like upturned icicles. Fog on the horizon blended the cloud-smudged sky into the land, not unlike the Atlantic’s horizon. Burdened by the thickest frost I’ve ever seen, the trees bordering the road were bowed low and would have groaned had they lungs. Saskatchewan may not be Nahant, but it can be a little like Narnia.

Christmas Eve has always been magical to me, but in a deeper way this year. While away from my family, I had dreamt about being together again, drinking tea by the twinkling tree. Thus it was a strange but beautiful thing to find myself living that dream after Midnight Mass. Our only light was provided by strung lights entwined in the tree’s branches and candles arranged on the coffee table. The smells of baked ham and yam from supper lingered still. We prayed together, gazing upon the creche, and then Father picked the chords to O Come Let Us Adore Him on his guitar, and we sang. After night-before-Christmas presents were opened, each child owned a faux fur blanket. Wrapped in these, we shared stories late into the night.

A few days later, there we were again, gathered around the tree, sipping apricot brandy in celebration, because we ten will soon be we eleven: my older sister, the oldest Mallett child, now wears a blue topaz ring on her left hand. How su

rreal it is to me, even as it is the most precious gift this year—a new son for my parents, a new brother for my siblings and me, and a remarkable husband for Tianna. As young girls, my sisters and I often play-acted a chaste re-telling of Titanic, each with our own Jack. I think it speaks profoundly about the desires burning within a girl’s heart—and how God fulfills them—by the fact that Tianna’s fiancé very much embodies her childhood Jack.

The landscape has shifted and will continue shifting—physically and metaphorically. My sisters and I—we are women now, no longer children in dress-up clothes. We are free to fly where the Lord wills. Where once the possibilities would have overwhelmed me, now I am exhilarated by what may be. And so, as I await my next adventure, I’ve acquired a horse.

A young dun, barely handled by humans. I’ve named him Islander. I may sell him in the spring to pay for a flight to some distant land where the hills are green, or I may keep him. Who knows what lies ahead—except a wedding, when the snow has melted.

The Tree and the Sequel